I’ve already said how transition for the full distance triathlon is about accuracy and not speed. So hopefully you can understand why my T2 time was 16 minutes and 4 seconds.

It was here I discovered my first and only cock-up of the day. Rule 1 for setting up your transition station: shoes should be placed upside down, so that IF it does rain they do not get wet. OOPS!

Everything was soaking wet but, as I was, that didn’t really matter. The only things that were dry were a pack of Jaffa Cakes. So I settled down for a snack and, whilst I removed cycle shoes, and socks and put some slightly less wet running socks and shoes on, I enjoyed a banana, a can of Red Bull and half a pack of Jaffa Cakes, wishing those who came and went around me “Courage!” and “Bon Chance!”

In the end I thought I better leave the rest of the Jaffa cakes until the end of the race, checked my trisuit for unopened energy bars and headed off.

Now I had done a run off of a long bike ride in training, so I knew that the first few kilometers would be all about getting feeling back into my feet. Then would come the rhythm and only then could I concentrate on finding a pace that I was happy with. But, in training, it was only my toes that I had to rediscover: not the whole foot!

The running course was 4 laps of 10 and a bit kilometers each, taking two loops around the lake and surrounding parkland. It wasn’t until I turned to climb the only hill on the course at about 6km that I was happy that I could feel all of my toes although my knees still felt a little funny. I have to admit I walked the hill, well there was a feed station at the bottom and I had picked up a banana, pretzels and cheesy biscuits so I needed to “take a moment”. Besides I had heard somewhere that many ultra-runners walk up hills as a way of coping with the long distances.

I got to the top and set off again. The view was great and I tried hard not to consider the drops either side that were threatening to kick start my vertigo. I was still going slow but over the next few kilometers I tried to adopt a style that resembled a run rather than an incontinent glide.

I don’t know whet happened next. I completed the first lap, picked up my first band and, feeling quite good,  started to see if I could push on a bit. My first lap had been completed in about 1 hour 10 minutes and, considering the state at which I completed the bike ride, I was quite content (although it was not quite quick enough to avoid being beaten to the end of my first lap by the winner who was completing his fourth lap: close but no cigar!)

I remember concentrating on my posture and my stride and starting to push on a bit. I rounded toward the first drink’s stop and then I just couldn’t run any more. I was breathing OK but I couldn’t “do” running.  I tried to start again, but couldn’t. It doesn’t matter, I thought, I’ll be fine in a moment… hah!

By the time I met up with Clare, just before the hill, I was ready to give up. If I couldn’t walk any faster than 3 miles an hour, I had better things to do, in France, than ponce around a fucking lake wearing damp Lycra for the next four and a half hours! We would find a nice restaurant and I would tell Clare all about my adventure so far.

The reason Clare was here was because without her love and support I just wouldn’t have even got this far. So when I told her of my plans she was there to step in and persuade me that, on this occasion, a meal seemed like the wrong way to complete the day and that I should carry on and see if my legs would come back.

So up the hill I headed, with my banana, cake and biscuits and considered my options. At the top a marshal on a bike wanted to know which lap I was on and I had to tell him I was only on my second. Whilst we were having this conversation another athlete passed who was also on his second and together we walked and chatted for about a kilometer. At the end of which and having used up all my French, I tried to ask him if he had walked a lot of the course or if he was managing to run some of it. He thought I was asking whether he wanted to run now and set off, obliging me to do the same.

I was rather pleased with the 50 paces I managed but at the turn I was struggling again and we waved and bid each other “adieu” and “bon chance!”

The next bit was down hill and I looked up to see my friend had stopped to walk too. Let’s just try, thought I, so off I shuffled proudly overtaking a beetle and several ants before I caught up with him. Shall I stop, I thought as I waved and carried on? No let me be his spur now: if he can catch me once he might like to try again… and he did and then I caught him again and, like a geriatric relay race, we got to the halfway mark.

In the meantime Clare had come and found us again (at a time I was actually running) so I explained that I had a new plan. That if I could carry on running the last 1.5k to the halfway point, that I would continue on. This shuffle was proving to be just faster than a walk and if I could keep it up I might beat the cut-off point of 23:00hrs: even if I didn’t make last orders at the hotel!

So after the 1hr10m of the first lap, me and my equally knackered running partner completed the second lap in a stately 2 hours!

Now the race was nearing its conclusion I could see just how few people where left racing and the answer was, not many! And most of them were on their last lap and passing me into the bargain!

As I approached the hill for the third time I heard a shuffle similar to mine, approaching from the rear. I looked round and there were two runners approaching, one in a tiger print smock. “Bravo” and “Courage” we greeted each other and as he passed I heard him chant, in a thick french accent: “I can, because I am a tiger!” I returned to my more prosaic “Come On Simon!”

So it was with a certain amount of joy that I completed the third lap – I even ran up that hill and seeing Clare at the final turn around said farewell and that I would see her in an hour and a bit… well a lot really, but by now, I wasn’t counting.

I picked up my third and final scrunchy to prove that I had done the distance and headed off for one last circuit. Being positive I started running but stopped to chat with any marshalls and food stations to thank them for their help. This was no longer about the time but about the enjoyment.

The sun had come out on the second lap and since then much of the mud and puddles had started to dry up and as the course dried up, everyone got happier. As I was one of the last few racers I recieved a hero’s welcome at every turn from the wonderful people along the course.

As I climbed the hill one last time, with a cup of coke and a rather nice slice of ginger cake with frosted topping. Enjoying the late Normandy sun, I looked back over the site to see the last few racers behind me. One past me with his whole family in tow: even his walk seemed to be faster than my shuffle. I’ve no idea how he managed to get behind me: maybe he was the cyclist hiding in the barn door half way up the hill in the rain and he had only come out when the storm had stopped 2 hours later: who knows.

The whole thing didn’t feel very “iron” at all but I was enjoying myself again!

I walked along the ridge, avoiding the edge and took the last turn for home. Two runners, who had already completed the race, came past and told me to hurry up because the event had finished: “for some people it might have,” I replied, “but not for me!”

So I broke into my run (I can call it a “run” because no-one saw what it really looked like) and plodded the last kilometer home.

A dozen or so helpers were still at the last feed station and gave me a personal welcome more enthusiastic than any racer had probably received all day: well it felt like that! I approached the point at which on the three previous laps I turned left and this time turned right for the finish time.

The amazing DJ s who had been entertaining and informing the crowd all day, were still there and cheered me home. Two photographers were also there and several marshals and of course my lovely wife, Clare.

As I ran (yes “ran”) down the finishing straight and they checked my number against the list the cry went up for “Simon d’Angleterre!” Cheers went up, people came out of the refreshment tent to cheer me through. A medal was placed round my neck, I was interviewed and showered with totally undeserving praise.

The run was always going to be the hardest part and in the end I probably only ran half of it, but I had managed to achieve the nirvana of marathon runners everywhere, a negative split (mainly thanks to the glacial speed at which I did my second 10k) and, taking the race in all, I can also say that I was the first Englishman home.

What a day! what a feeling! What a race, what a great bunch of people! 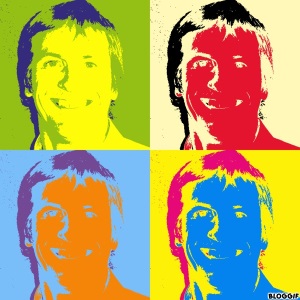 Did you join in with the 2015 Theatre Survey? Sign up to find out the results